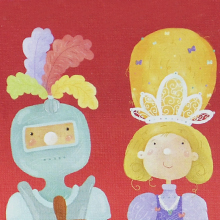 There’s a real panic in a magical kingdom — someone switched all headdresses of all guests in the castle. But maybe the reason of the panic was not someone’s mischief, but a prolonged revelry, when guests started leaving only in the morning. Anyway, someone needs to correct this and help each character find his or her proper headdress. The one who copes with this task best will be the winner.

Briefly about the game:
Rules of the game:

Before you start the game, shuffle both decks: characters and their headdresses. Place 7 character cards face up, and place a headdress card next to each character face down.

Players act in turns clockwise Each player can resolve any of these actions on his or her turn: 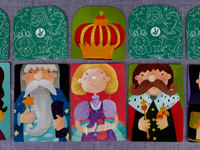 The first action is to take a peek at the headdress. Look at any card and don’t show it to anyone. Now you know the headdress that lies there.

The second action is to switch two headdresses not looking at what headdresses there are. This action can make you become closer to victory and/or confuse opponents; or you can even confuse yourself. 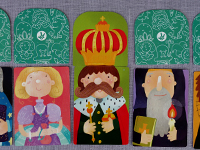 The third action is to open the headdress card. If it fits the character, you take both cards and gain victory points for that. Replace the newly taken character and his/her headdress with new ones from decks.

If the headdress doesn’t fit the character, flip the card face down and gain a penalty token for that. The worst of it is that you show the card to other players, so others know what kind of headdress is on this character.

The game ends when only three characters without their headdresses are left on the table. After that players calculate their victory points. Each guessed pair gives one victory point, each error subtracts one victory point. Rules may seem a little bit too complex, but they are pretty simple, just play to see it yourself. Train your memory, bluff and win.

How the game was created:

Have you ever noticed how cartoons for children differ from movies for ? As you might have guessed, this question is rhetorical.

Movies are not far away from real life, and you can easily see their creators’ wish to be as close to the real situation as possible, despite such onscreen «reality» is not more than just a formal resemblance. Cartoons, on contrary, are nominal and simple: there’s a legible division to good and evil, the plot is simpler to understand, the whole situation is as simple as can be, and there’s nothing to be assured. More to be told, all fairytales are pretty plain: not many characters, but each of them has a unique role, which differs this particular character from others.

These features were the basis of the Magic Hat. In the beginning it was a game about a magic kingdom, where each character had his own mission: King rules the kingdom, Stargazer looks into the future, and brave Knight saves Princess, who’s always being kidnapped by Dragon. In other words, everything’s simple and clear.

But the game itself was not for kids at all: while having ability to switch their headdresses, characters were gaining different abilities, and that’s what created a total chaos. So, Knight in a crown became a Prince, who was not performing exploits, but ruling kingdom when the King was away, and Princess in Knight’s helmet was Young Heroine, who could fight Dragon herself. Moreover, the goal of the game «create a magical performance» was a little too .

Such complexity does no good to games at all, and our game was not an exception. So we decided to omit exchanging of helmets, hats and crowns, giving each character his own headdress, and keeping the basic mechanics — each character has his own ability, which he must use for his player to gain victory points.

Alas, simple magic kingdom was neither simple, nor magical, and all characters’ roles made some sort of Brazil series, where all lose memories and find unusual family ties with people you never expect it to be. The only difference was that the action was not on plantations, but in a fantasy kingdom.

The idea with headdresses was, however, pretty interesting and original, so we decided to get rid of everything but the things that at first seemed only a meaningless decorations. In other words, dressing up came to the first place, and, to tell the truth, the game became much better because of this.

Different versions were made, in which players had to find the missing headdress for each character. These ideas were, luckily, viable. All versions were playable, all of them were interesting in one way or another. And the magic hat itself, which could be used by any character, fell in with the game itself pretty good.

It might happen so that one player will switch two cards, and the next player will switch them back. The game will never end this way, right?
Actually, players cannot switch back cards that were switched the very previous turn. There is nothing about it in the rules, though.

It can happen that one player will get plenty of victory points, and other players won’t have a single chance to win. What’s the point in continuing the game?
Pleasure from just playing the game, of course! But you can immediately stop this round and play another one.

We came up with the new rules for this game, and we liked it very much. We would like to share our rules.
Great! You can send us your rules for our game and we will post them on our site.

External links:
Where to buy: